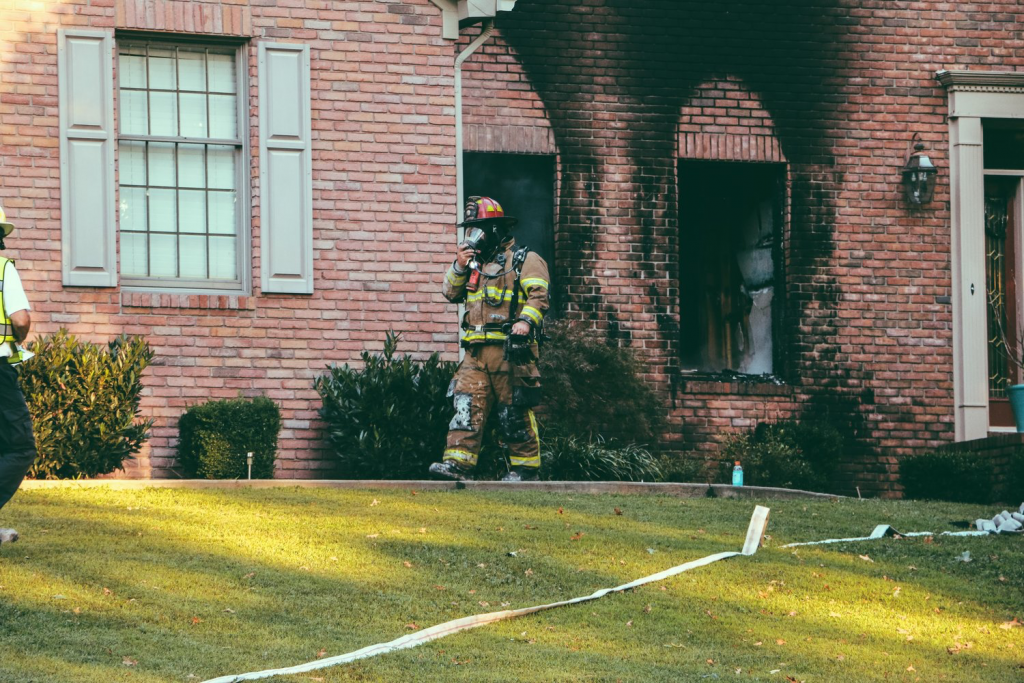 The Nudist Who Wore His Heart On His Sleeve – Part 3

This part of Danny’s story starts several months earlier when I returned home in the evening to my house smelling like smoke.  Unable to figure out the source and worried about an electrical fire, I called the fire department down the street and asked if they could come check.  In the meantime, I discovered the source.

A snow globe on the front bedroom window sill had turned into a magnifying glass in the spring sunlight and scorched my bamboo curtain.  This was actually the second time in my life that a piece of decor had turned sunlight into a concentrated beam and caused scorching. In my parents’ furniture store, a beveled edge on a glass table had done the same thing, sparking a little fire.  According to my dad, one person shook her head in disbelief and said, “Good thing that didn’t happen at night when no one was here!”  (Think about it….)

This time, in my house, I knew I’d been fortunate but the firemen arrived and wanted to check it out.  I explained the situation and the older captain-y man nodded. I pulled back the curtain so they could see the situation which was when the younger fireman commented, “Whoa!  Did you make sure you unplugged that thing?!” The older fireman shook his head and said they’d be going.

How does this relate to Danny?

Once Danny was approved for Medicaid, the state picked up a few hours a week of in-home care.  The next time I was out at Danny’s place, I had Shelly with me from the in-home care agency so I could introduce her to what I knew about Danny’s life and start services soon.  Danny insisted on giving us a tour of the clothing optional community and, rounding a curve in the road, walked us right up to a young guy — completely nude — who quickly gathered up his yapping teacup poodle and greeted Danny.  It was the fireman who told me to unplug the snow globe just a few months earlier. I have never made more eye contact in my entire life.

Danny happily introduced us as the fireman’s wife pulled up in a Ford F250, hopped out in a business suit and put her arm around her very naked husband.  Danny insisted on introducing us again and making sure we knew this was his friend.

Thankfully, Shelly sped up the conversation saying she had another client and Danny slowly-happily led us back to his trailer.  She finished reviewing the care plan with: “Danny, I know you don’t really wear clothes but I would imagine if you did, it would take you awhile to get dressed so I’m going to add in some time for help with that too.”

“Hu-hu-hu-hu-hu-huh!” he chuckled.  And for several months that was the last I heard from Danny.

Some clients never really go off your radar, whether it’s because you like them or they are survivors who beat the system every time something hard comes their way.  One day the friend-slash-girlfriend called to tell me that Danny was no longer really maintaining his trailer and the clothing optional community was wondering if there were other options.  The county where we lived only had two subsidized housing buildings and getting into these apartments was tough. I called the property manager, Debbie, and explained the situation, thinking to myself that “other job duties as assigned” sometimes includes flat-out begging.

Debbie miraculously had an apartment on the bottom floor in the farthest corner of the building next to a green-space.  I had my doubts about how Danny would do in close proximity to other people who wore clothing. The friend-slash-girlfriend agreed to meet us at the complex where we all would hopefully sell Danny on a move, and where his rent would only be one-third of his income, approximately $275.

Danny sauntered in or whatever it’s called when you have Parkinson’s have to lift your knees higher to take a normal step.  Debbie escorted us down the hall and into the room.

You could tell that Danny was dismal.  The whole thought about losing his trailer and truck and dancing to Swedish music…it was too much.  He politely looked at the kitchen and bathroom, nodding when the friend-slash-girlfriend suggested where to put his bed in the little studio living area.  We’d have to get him a bed.

The only person who wasn’t talking was Debbie.  She was watching Danny, I thought to see if he was friendly enough to be a good fit.  Then she walked up to him.

“Danny, I want to show you something,” she said.  She slid open the doors to the small patio. “You are on the end of the building and, at the end of this piece of grass, the property slopes into a creek.  I would think that if you want to be naked in the moonlight, this would be the best apartment for you.”

Danny looked out the doors.  Nothing but green.

“You don’t have any steps and you can be as naked as you want out here and no one will ever know.  This is where I’d want to be naked if I lived here.”

That’s what it took.  Danny signed the paperwork for a subsidized apartment in town but on a greenbelt.  The friend-slash-girlfriend helped him collect his belongings from the trailer and move in.  Several of us on Danny’s team visited the clothing optional community one last time — for old-times sake (and perhaps to sneak a glimpse of the fireman).

Settled in his place with caregivers coming in regularly, Danny again went off my radar.  Months passed. I was sure at every full moon, he was likely in the green-space soaking in the moon rays.  I had heard from Debbie at a community meeting that there was a family of skunks making regular appearances at the apartments but she didn’t tell me anything about Danny.  We weren’t over the hump yet though. Somehow, I became Danny’s emergency contact and the hospital called to say he had been admitted. It was a surprise because I’d moved on and Danny’s case seemed to have stabilized.  I went to the hospital anyway.

Danny wasn’t in his room but I could hear him in the bathroom.

Soon Danny shuffled out of the hospital bathroom.  He had a gown on but it was definitely not tied. I motioned for him to turn around so I could tie it for him.

“Does this remind you of the time you escaped from the VA hospital?” I asked.  He grinned. “You better get back in bed if that’s where they want you. What happened this time?”

Danny carefully sat on the edge of the bed and pointed at his foot.  It was bandaged and there was a space where they’d amputated at least one of his toes that got infected.

“Did they say if you’ll be able to dance again?” I looked at him, knowing this was important, vital.  He nodded.

“Did you just lose two toes or just one of them?”

He held up two fingers and, in perfect clarity said, “D-d-d-does anyone want l-l-l-little smokies for dinner?” and then fell back on his bed laughing like a low-idling rototiller.

“Danny, other than the toes, you look good!”

I shook his hand and told him I would follow up with his care agency so they’d know when he was coming home.  I made him promise to keep his hospital gown on, at least in front.

It wasn’t until I was moving to Colorado for grad school and had given my notice at the area agency on aging that I realized all the people I’d be leaving behind, especially the clients.  I couldn’t exactly stop by each person’s home and wish them goodbye.

Two weeks before I left, however, I was in Target.  A woman I kind-of recognized came down the aisle but I couldn’t place her.  Then a tall blond tan Swede in an electric shopping cart rounded the corner behind her.

Of course, it was Danny.  He was definitely less hefty than when I’d first met him and it was the friend-slash-girlfriend who told him I was standing there.

“Danny, it’s Jill,” she said.  He couldn’t see as well as before but he adjusted his cane which was in the cart, then put his arm up.  I held my forearm up to his.

“You’re still tanner than I am, Danny. You look good!”

I wanted to bring up how I would always remember his bumper sticker that said, Suck me, Shuck me, Eat me Raw, but I didn’t want to call attention to the fact that he wasn’t driving anymore.  Instead, he held my hand for a minute as if it took a little bit of effort to think through the Parkinson’s and realize who I was.  Then, quietly, he got it and I could hear him chuckling, “Hu-hu-hu-hu-hu-huh!”

Western Care Partners guides families who are struggling to figure out options for someone who’s getting older or who want to know how to plan for themselves.  We explain resources and services, facilitate family conversations and support you through the difficult situation of someone needing more help. Call or send us an email for more information: 720-675-9902 or www.westerncarepartners.com.