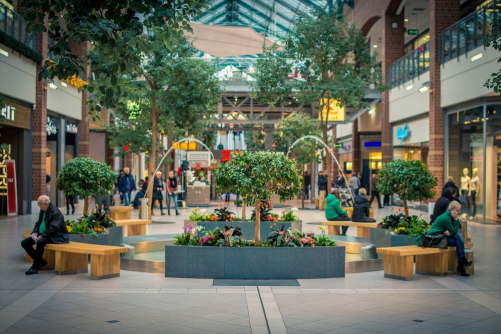 Mall Walks, Volunteering, and a New Theory about Loneliness

Denver, CO — While I grew up with a strong sense of volunteerism, I didn’t have a long-term relationship working with volunteers until I was put in charge of the mall walk.  This is where people who are often older show up to the mall early in the morning to walk laps out of the inclement weather.  Emphasis on early. One local hospital had made an attempt to get it going, dropped the ball, and so the hospital I worked for picked it up.  Well, I picked it up. It was just the thing to put a 20-something-year-old in charge of on a Monday morning.

Not long after I began the routine of showing up to the mall at 7am on Mondays, a woman contacted me and offered to volunteer.  She’d been part of the mall walk before and was happy to hand out brochures. From the start, she told me that the mall walkers wanted to have their blood pressures taken.  Unfortunately, I wasn’t a nurse, I told her, and we definitely didn’t have funds to hire one. Every week, however, she continued to tell me that we needed someone to take blood pressures.

After a month or so of hearing this, I suggested that she take a survey and find out what the mall walkers really wanted.  She agreed that this was a fine idea and stepped in line with some walkers.

“Would you like to have someone here take blood pressures?” she asked…suggested.  I should’ve seen where this train was headed. I explained that we probably needed to use a more objective approach, you know, to make the survey results more robust.  She agreed — after all, we were representing the hospital and we have rigorous standards.

She walked up to the next couple.  “What would you like to see the hospital provide at the mall walk?”  Yes, nailed it! I thought.

Then she said, “For example….I, for one, would love to see someone here to take blood pressures.”  Touché, grasshopper.

And that’s how I ended up learning how to take blood pressures at 7am on Monday mornings for a good 4-5 years in my twenties.  We grew the program to over 450 participants, probably because of the blood pressures.

In 2006, a study by the Harvard School of Public Health aimed to see if there was a relationship between older adults volunteering and their use of healthcare services.  The results were impressive:

Here’s another piece.  Volunteering often causes us to be around people and there is a new theory about loneliness that makes being around each other even more significant.

Face-to-face interaction (as opposed to online interaction) boosts our endorphins.  Flip this the other way to no interaction and we actually feel pain. Naomi Eisenberger, associate professor of social psychology at UCLA, found that feeling lonely or rejected registers in the same areas of the brain that process physical pain.  Same-same.  Loneliness hurts.  Which makes sense evolutionarily — if you’re separated from the tribe, you’re more likely to be picked off by a cougar.  Loneliness / pain should make you go back to your tribe.

The new theory of loneliness, though, has another slant: if loneliness causes pain and stress, this can make us go into flight-or-fight mode.  Production of cortisol and epinephrine (stress hormones) goes way up. Then, once that flight-or-fight mode is activated, we’re in “self-preservation now!” mode.  Red alert should make us want to reconnect but instead everything — including people reaching out to you — is now seen as a threat. We’re even more likely to reject any offers to engage and even lash out at the people we’re alienated from.

Ugh.  So what’s a person to do?  According to this new theory, the best thing to do is stop the feedback loop by being aware of it and second, don’t let it start in the first place.  So how do you engage people to volunteer, to join, when they might be lonely? Here are some ideas:

Happy National Volunteer Month!  For volunteer ideas in the Denver-metro area, check out our list of unique opportunities under “Resources”.