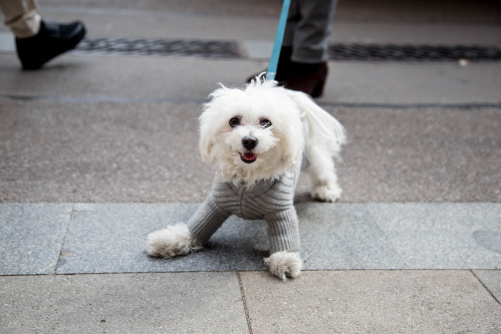 Let’s Hear it for the LLDs!

Mount Vernon, WA — I meet Marilyn at her house.  She is caring for her husband with dementia. Within the first few minutes of me explaining my role as a social worker, she leans forward, looks me in the eye and confides, “I’ve slept with a lot of dogs but this one’s the best.”  Evidently, he’s a snuggler, a snorer, and buries his bones under the sheets.

I crouch low so the ten-pound growling shih-tzu mix can sniff my hand.  He acknowledges my existence with a snort-sneeze before heading back to the couch where Marilyn sits, ready to discuss respite and how to tell when it’s time for memory care.  I add him to my list of LLDs making their way in the world of all of us getting older.

So what’s an LLD?  It’s the first dog you’ll meet if you ever work in the field of aging — I’ll get to that.  First, a sidebar.

If you are a mushroom hunter, there’s no way you can learn the name of every fungi.  You focus on what you can identify as poisonous (amanitas) — because it’s cool to point out something that can kill you — and you learn what is safe to eat (chanterelles, morels, etc.).  Everything else out there is a sign that at least fungi is fruiting but generally all those little brown mushrooms you see everywhere….they’re affectionately called “LBMs” — by mycologists and home-mushroom hunters alike — Little Brown Mushrooms.  So in the same way, I have noticed that many people, somehow as they get older, find themselves the proud owner of the LBM of the dog world: LLDs — Little Lap Dogs.

We all know one.  When I was interning with a palliative care program, I met a man who was the jeweler who designed Al Capone’s diamond pinky ring.  No kidding.  His basement was full of thousands of dollars in jewelry equipment — files, magnifiers, soldering irons.  When I rang his doorbell, a LLD would go crazy on the other side of the door. My client would get up, hold onto his pants (he’d lost weight and they often fell down which cracked us both up) and let me in to tell the wonderful stories about people he’d crafted jewelry for.  His LLD sat proudly next to him in the recliner.

Earlier in my career, on a rainy afternoon in Skagit County, I found an LLD wandering the neighborhood.  He was filthy, a little overweight, definitely had an underbite and goopy eyes (you know the eyes I’m talking about).  Somehow, he’d managed to keep his wet black t-shirt on that said “Devil Dog” in rhinestones. Per his dog-tags, I drove to the address — a trailer that was empty with no one answering the phone.  Devil Dog was mine for the night. I took him home, gave him a bath and cat food, then stuck him in the bathroom for the night where he peed all over — LLDs do not handle lap-separation well. The humane society called me back the next day to say they’d found the owner.

Other stories…Another friend’s mother had an LLD named Lady who was smuggled into memory care to live out her life with her owner after the administrator realized the transition from assisted living would never fly without the dog.  She grounded the mother in the present when the rest of her life had slipped back into the past. I mention this to my mom. She recalls that her own mother — never a lover of animals — was not keen on any critters in the house except Biff, the LLD pomeranian with an underbite who hated bicycles.

I want to honor the place these LLDs have, especially later in our lives, even if they are often untrained and wearing t-shirts saying, “I’m a princess”.  Three things come to mind:

We can get through anything with a little support, even from a stringy-haired, growling, underbited lap dog.  Let’s not underestimate the power of a good LLD.

Western Care Partners provides comprehensive guidance and support to families making decisions on how to care for an aging loved one — and often their pets.  Contact us for more information: 720-675-9902 or www.westerncarepartners.com.

PrevPreviousSex, Drugs and Rocking Chairs
Next6 Things to Remember as you Start to Care for your Parents*Next