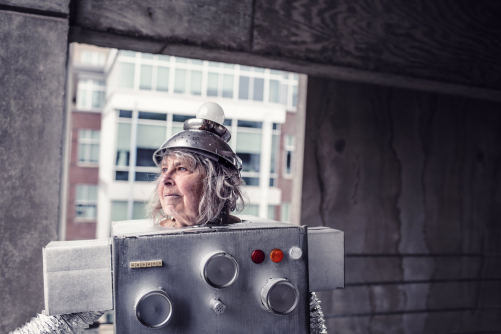 If Only I had a Heart (or: How I was almost Fired from Hospice)

Longmont, CO — Before I was allowed to have my own patients as a social work intern with hospice, I was required to shadow every role in the organization — which was how I almost got myself fired.

In the first week, my supervisor sent me out with the intake nurse.  This particular RN explained that there was a maze of paperwork which hospices had to fill out before someone could receive end-of-life care.  The paperwork included two doctors confirming the terminal diagnosis, a medication review, baseline documentation of vital signs, paperwork for Medicare and health insurance companies, Do Not Resuscitate (DNR) orders, and, above all, signing an agreement to receive services.  This is why hospice intake appointments can take 3-5 hours.

“It can get kinda emotional,“ the RN told me.  “They really should send a social worker out for everyone.”

The RN went on to say that our upcoming visit was to a couple she’d seen twice already but had not signed up — even though the husband really needed care.  He had end-stage heart failure; bigger than that, there was a misunderstanding with his wife. The husband was ready to stop treatment but believed his wife would be upset if he “stopped fighting”; the wife was ready for him to go on hospice but didn’t want to give the impression that she’d “given up” on his situation.  The husband’s doctors finally said there was nothing they could do and a referral was made to our hospice (again).

Upon arrival, it was obvious that the wife had experienced a huge accumulation of loss in her life and losing her husband would add to the stack.  We sat at the dining room table next to a tall silver bookcase. There were urns on the glass shelves containing the ashes of her loved ones. As the wife launched into recounting the losses, the RN focused on the husband who eventually retired to his bedroom.

“Could you just stay here and talk with her?” the RN asked me, hopeful that she was finally going to be able to complete the paperwork in the quiet of the man’s room.  So this was why she wanted a social worker to come along.  I noticed the wife had emptied one box of tissues and was going for another.

Within twenty minutes, the wife recounted that both of her parents had died when she was young, her plans for college fell through, she’d lost a brother and several beloved cats (who made up most of the remains in the urns on the silver bookcase).  Now her husband was going to die.

On top of all this, she was exhausted from the doctor appointments which were ringing their medical bills up into the thousands.  She told me that even the mortuary was out to make money on them, wanting to charge her $450 each time she opened their crypt in the mausoleum to add anyone’s ashes.  She barely got out that she hoped to add her cat’s cremains (colloquial for cremated remains) before she was sobbing too hard to speak.

It’s too much and you’re fighting alone now?  I commented.  She nodded and grabbed more tissues.  I wondered where the RN had gone, not really sure what to do.

Then, through some breaths she could barely get out, the wife said she’d actually solved the problem of how to get the cat into the crypt with her husband.  The mortuary gave her some inside info that, after her husband was cremated, she could mix in the cat’s ashes with his and only pay to open the crypt once! The thought of her cat sent her into another round of sobs as she blew her nose and looked to me for comfort.

She froze mid-hiccup and, looked perplexed, then angry and finally laughed.  By the time the RN completed the paperwork, we were talking about the obituary.

“See,” the RN said.  “That’s why we should always bring a social worker.”

Everyone has an archetype of someone whose emotions are particularly difficult to be around, whether it’s anger or sadness or negativity.  For some of us, it’s those who simply can’t stop crying. Crying has its very human and messy place, and is understandable given the experience of loss.  It also can make administrative tasks that come with any situation much harder. Then, compassion is spread thin and unbridled emotions seem to get in the way of the “help” we think we’re there to offer.  The person seems frozen in a perpetual state of emotional overload that many of us have a hard time sitting with, acknowledging and not fixing.

One of the best analogies I’ve heard for this state of mind is that it is like the Tinman on the Wizard of Oz.  He was hard-working (a lumberjack), has survived loss (in the story, he’s a widower who loses his home) and has a tough exterior…and yet, in actuality, he is vulnerable and cries easily.  Then, because he’s made of metal, the tears make his joints rust and — voila! — he is paralyzed by his overwhelming emotions.

The tips for being kind and helpful (and not getting yourself fired) when working with these individuals are as unique as their emotions:

Stay calm and don’t promise that everything will be alright — because right now the world does not seem safe or okay and if you try to cheer them up, you’re only making yourself one more person who doesn’t understand their situation.

Control the tone of your voice.  Be soft and reassuring.  Try a neutral, honest statement like, “I’m so glad you told me” or “This whole thing is so sad” to let the person know you’re hearing them.  Remember that responding with anger generally doesn’t snap someone out of a sad state. Humor also can be annoying (and get you “fired”) because you generally come off as trying to make light of a situation that, to the person in tears, is devastating.

Ask open-ended questions.  My favorite is, “What else?”  A mentor years back would ask me this when I spun off on all my concerns.  It gave me the chance to feel like I could get all my worries out on the table with a witness who acknowledged my pain.  Other good questions include, “How have you gotten through sections of life like this in the past?” — just listen for a while while they identify their strengths.  Another good question: “What’s keeping you from being even more sad?” which is the reverse of focusing on the sad stuff and begins to steer a person toward their strength and hope.

Chop the problems into manageable pieces.  You know, like a woodsman.  You’ll know if you get to the problem-solving part too soon in their story if there’s resistance.  If you take on a solution too big, too soon, they are going to see your efforts as trying to fix and intolerant of their emotional process.   Maybe start by asking if you can just get them a glass of water.

Finally, it’s okay to tell a person if you are getting overwhelmed by their emotions and don’t know what to do.  Give them a chance to respond, to know they’ve affected you.

I had a hard time working in some parts of hospice.  I have cried many times with clients when they tell me something sad.  But it’s always turned out okay to show my emotions. If nothing else, I acknowledged the situation of another and they felt less alone.  Also, me crying does not turn the situation to be about me, which I think we sometimes worry about.  In the words of my hospice supervisor, As long they don’t start comforting you, you’re fine.  (And as long as they don’t fire you too.)

Western Care Partners helps individuals and families navigate the tasks, emotions and family dynamics that come with getting older or setting up what care we want for ourselves.  For those dealing with challenging dynamics between loved ones, we facilitate friend/family meetings to make sure everyone is on the same page.