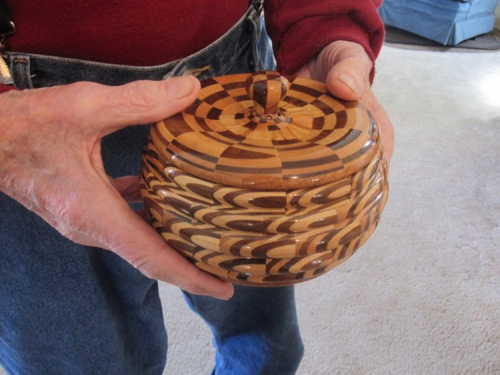 The Effects of Holding Yourself Up

He couldn’t find his way out of a paper-bag much less his own chair but the guy could still turn a bowl.  My client had been a woodcarver all his life and, in spite of the dementia, he could still make one of the most dangerous tools in the shop — the lathe — sing like an angel (or turn somersaults as the case may be).

This gentleman and his wife lived in a single-story white house in what used to be the outer part of town.  Both in their eighties, she took more care of him than he did of her. And, on most days she minded this a lot and sent him out to the wood-shop.  In spite of the dementia, sending him away kept them close.

This man was one of the few people I’ve met skilled enough to turn a wooden bowl out of a block of madrona — a hard and difficult wood.  Turning a bowl requires attaching a block of wood to the lathe which spins it like a sideways top at speeds up to 27 miles per hour. As the wood spins, the woodworker presses a razor-sharp chisel into the oncoming edge to carefully carves out designs.  A lathe could’ve easily made the leg or spindles of the chair you are sitting in; a concave structure like a bowl is a bit more complicated. Due to centrifugal force, one misplaced move and a chisel could fly back at you, or, the block of wood could fly off at your face.  Not to mention, the wood itself might pose a challenge.

Madrona is a leggy broad-leafed tree with perpetually peely bark that grows in the conifer understory along the bluffs of Puget Sound and all down the west coast.  Madrona is the local term — it’s also called a madrone; Canadians call it arbutus.  Either way, madronas are evergreens that lose their leaves throughout the year instead of all at once — but unlike most evergreens, they are classified as a hardwood.

In addition to being hardwoods, madronas withstand heavy gusts off the Pacific Ocean and/or strain toward the light that filters through the forest canopy.  The tree must support its long limbs which often reach out as far as up.  Imagine sitting in chair pose and reaching your arms out in front of you for your entire life, your lats, your back, your core constantly engaged and your whole body working to hold you up.  Now imagine you’re made of wood and do this over the course of one, two-hundred years, growing, holding yourself in place against gravity and the elements. This is why the wood of the madrona tree holds an incredible amount of tension.  The entire tree works to hold itself up. Unlike your muscles which you can relax to get out of chair pose, when a madrona is cut down, its wood is no longer straining against itself and has a tendency to spontaneously collapse and crack as tension is released.  Madrona, dried incorrectly, can be both hard and incredibly unstable.

For the moment, I was admiring the bowls, knowing the time and chance that went into each work of art.  Some even had matching lids with delicate finials, others inlaid with lighter and darker woods. Several madrona bowls with blooming burl patterns served as a centerpiece on the dining room table.  None of them were cracked or warped. He picked them up to show me. He explained that you had to dampen the wood to raise the grain, and then sand that down, and do this over and over to get them smooth.  They felt like warm glass.

Even with dementia, this gentleman could still say where most of the wood came from.  The slough by Craft Island, Skagit River, Samish Island. He’d been an outdoorsman — a duck-hunter to be exact — his whole life.  He’d carved his own decoys and the sloughs of Skagit County were his tromping grounds, although now his wife had given his shotguns to their son.  He told me that some of the wood came from the riverbanks and whatever floated from upriver — if he was lucky a piece of apple or oak. Other pieces he’d found washed up on the beach, brought in by the tides who knows how long ago.  It took him a little bit to get the words out but he remembered. His wife smiled and nodded, “That he does remember.”

I’d talked with his wife about how long she’d known he had dementia.  She said, looking back, it probably started years ago. He waited to retire and the lack of structure and purpose was a lot for him to adjust to.  She told me he was used to being in charge, which was why, kind as he was, she sent him out to the shop where he could be king of his castle. She was aware enough (though shocked at first) to realize some of their bills weren’t being paid so she took over the checkbook.  She was gentle about the things she took over as he slowly was able to hold up less and less. It was when something changed suddenly, she said, that she felt the world was out of control. Like the madrona, as he came down, some of the tension released gradually and other times altogether.

By chance, I found myself by their house when I was dog-sitting my uncle’s hunting lab, a sweet black lab named Jasmine.  I knocked on their door and asked the wife if it was okay to bring her in. She nodded and pointed toward the living room.

Her husband was sitting in his recliner with his eyes closed and she said he’d had a quieter day than usual.  I sat down next to him, patted his knee and told him I’d brought him a surprise. He opened his eyes and looked down as Jasmine sniffed his hands.  He didn’t have much to say but just patted her head and smiled. I chatted to him a little about ducks and told him stories about Jasmine being the most amazing retriever we’d ever seen.  I showed him her webbed paws and we both agreed that she was a good swimmer.

When it came time for me to go, he stood up, not really knowing why.  I told him it was time for me to leave and I was going to take Jasmine for a hike.  Hearing her name, Jasmine leaned into his leg effectively pinning him against the recliner, tail slowly wagging.  He nodded. Reaching down very very carefully, he patted her on the side of her head and gently murmured, “Now that’s a good dog….that’s a good hunting dog.” 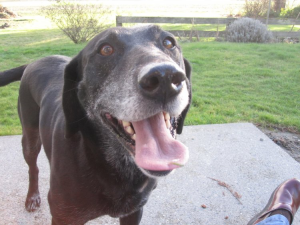